Where: All Neighborhoods, but Especially Lakeview, Wicker Park, and the West Loop

Chicago houses one of the country’s best nightlife scenes. With dozens of breweries, taprooms, cocktail bars, and clubs, drinkers of all constitutions will find something to enjoy. In fact, though reviled by Chicagoans of all ages, Wrigleyville has the longest stretch of continuous bars in the country. You could say this city likes to drink.

To attract customers, Chicago bartenders have to get creative. Whether it’s opening speakeasy-type establishments—a la The Violet Hour and Three Dots and a Dash—or collaborating with other local businesses—such as Dark Matter Coffee—these bartenders know how to draw a crowd. Most recently, however, the city has seen an increase in themed pop-up bars—and we’re not complaining.

Looking for something a bit more upscale? The Rookery (2109 W. Chicago Avenue) is celebrating Stanley Kubrick’s The Shining with a pop-up named Room 237. Customers can sip bourbons and movie-themed cocktails while talking to Lloyd, the film’s infamous bartender. 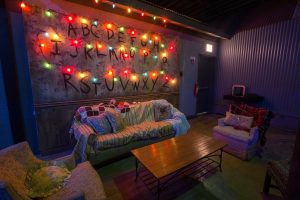